We are pleased to share our 2022 Board of Directors. These individuals generously support Best Buddies Canada, lending their expertise and knowledge to the organization.

Aubie is a media professional with extensive experience in the broadcast industry as both a programmer and development executive. In his most recent role was Director, Original Programming at Astral Media’s The Movie Network, Aubie was responsible for the development of TMN’s Original award-winning pay television programming which has aired throughout the world.

Previously, Aubie held the role of Director, Programming at The Movie Network where he oversaw all aspects of programming for the pay network TMN and its classic movie channel Mpix. Since leaving Astral, Aubie has written several new television and feature film projects while playing an active role in the Canadian entertainment industry.

Jessica Zackheim is the Founder of Jessica Zackheim Inc., a lifestyle management firm that specializes in helping individuals, families, and businesses to better manage their responsibilities and relationships.

Jessica is a graduate of Branksome Hall School and sat on the Alumnae Executive for over 5 years as in various leadership capacities.  She attended Dalhousie University and York University and has a B.A. in Sociology.

Jessica has worked with Best Buddies for the last five years coordinating the Thrill of Ascot Event which runs annually every June, various shopping evenings and other fundraising initiatives for the charity.

She lives in Toronto with her husband Ken and their two children.

Daniel J. Greenglass Co-Founded Best Buddies Canada in 1994 and was Co-Chair until 2020.

Mr. Greenglass currently sits on the Board of Directors of the Toronto General and Western Hospital Foundation and is Board Champion responsible for raising $150 million for the redevelopment of Toronto Western Hospital’s new Centre for Image-Guided Neurosurgery operating facility. Mr. Greenglass also sits on the Board of Directors of Honest Reporting Canada an organization that promotes fairness and accuracy in Canadian media coverage of Israel and the Middle East.

Mr. Greenglass has been educated at Crescent School, University of Toronto and is also a graduate of Harvard University, Advanced Management Development Program in Real Estate.

In 2007 Mr. Greenglass was awarded the Ontario Medal for Good Citizenship for his philanthropic work and specifically his work with Best Buddies Canada.

Other charitable endeavours include raising over $1,500,000 for Grand Cru Culinary Wine Festival in support of UHN; working with the 519 Community Centre Building Campaign; Patron/Chairman for the 2012 CANFAR Gala raising over $1,000,000 benefiting the Canadian Foundation for Aids Research.

Penny Shore Co-Founded Best Buddies Canada in 1994 and was Co-Chair until 2020.

Ms. Shore is a graduate of Carleton University and the University of Toronto, her career experience includes being a publisher, gerontologist, and social entrepreneur.

Over the past 35 years, as President and CEO of P. Shore & Associates Inc., Ms. Shore has been an innovative and highly creative leader and business builder across Canada. She has established and developed products and organizations from concept to full operation, in both the public and private sectors. She has been a custom publisher in both business and mass-market educational programs. An experienced public speaker, she delivered North American media tours and extensive national training programs. Her custom fundraising events for numerous charity clients have created successful results, meeting fundraising targets.

Other charitable endeavors include being on the Board of the Canadian Foundation for Aids Research, Chairperson of CANFAR’s National Youth Network, Founder and Chair of the Research Centre for the Older Worker, Board President of Ariel’s Legacy Canada, and Co-Founder and Advisory Board Co-Chair of VOLT Hockey Canada. She has received the City of Toronto Access, Equity and Human Rights Award, and the International Leadership Award, Best Buddies International.

Martine is the Vice President, Finance at Fiera Infrastructure Inc., an infrastructure fund investing in infrastructure assets around the world.  Prior to joining Fiera Infrastructure, Martine was in the finance group at a mid-tier publicly traded mining company and at PricewaterhouseCoopers LLP, focusing primarily on international publicly-traded mining clients. Martine is a Chartered Professional Accountant. She holds a Bachelor of Psychology from the University of Western Ontario and a Master of Management and Professional Accounting from the Rotman School of Management at the University of Toronto.

Martine has been involved in several charity events over the years, including a committee member of an intergenerational Prom for Holocaust Survivors for over 400 Survivors and Young Professionals.

Ms. Ben-Haim has been a board member of Best Buddies, a global charitable organization since 2018.

Her other charitable endeavors include serving as a committee member for Art Toronto’s fundraiser for the AGO since 2016.

Heli Donaldson established and operated the renowned landmark Spirits Bar & Grill of Toronto for over 25 years.

Heli maintains her involvement in the hospitality sector focussing on the wine, spirits and service industry.

Director of Best Buddies Canada commencing in 1998. Founder & Chairperson of the Best Buddies Advisory Committee with the mandated to assist in achieving the vision and goals of the charity.

Previously co-chaired the Best Buddies Gala in its 8th and 9th years.

Graduated from University in Boston, Massachusetts. Employed in Boston for several years for Scudder, Stevens, and Clark. Upon returning to Toronto worked in advertising for Vickers & Benson.

John David Elwood has been a Board Member of Best Buddies since 2000. In 2002 he conceived and helped initiate the annual “Thrill of Ascot” event which, with the full support and great efforts of the Board, Staff, and Sponsors, has now become one of Toronto’s most popular fashion charity events.

Other charitable efforts include: Fundraising for the Myelin Repair Foundation in California, the MS Society of Canada, and years as a team leader liaising with corporate sponsors for the United Way.

As a member of the Independent Financial Brokers of Canada, and licensed by the Ontario Securities Commission, Mr. Elwood has managed large groups of private investment portfolios.

Mr. Elwood graduated from Bishops University in Quebec, Canada. He entered the Banking and Trust industry with Montreal Trust, ultimately promoted to Head Office in Toronto in the Pension Trust Investment Department. As an Industry member, he joined the Education Committee of the Mutual Funds Institute of Canada, then in its early years.

Joanne Fletcher is the CEO of the Mint Green Group, a leading Canadian sports and lifestyle distributor, who partners with global brands to propel their businesses in Canada.

With an extensive background in brand marketing and business leadership, Joanne has spent 20+ years working with some of North America’s most prominent brands, including Kraft Foods, Merrill Lynch, PUMA, Nike and Barnes & Noble, in roles that took her from Toronto to Portland, to NYC, and ultimately, back to Toronto. She joined the Mint Green Group in the Fall of 2014, assuming the role of CEO in January 2018.

As a visionary and culture-driven leader, Joanne brings a strategic, collaborative, and passionate approach to her work. Beyond her role at Mint Green, she has served as a member of the advisory board of LIGHTS, a Toronto-based organization dedicated to providing housing solutions for adults with intellectual disabilities. She also spent 3 years coaching soccer with Ontario Special Olympics and continues to be involved with OSO as a parent. She is the proud Mom of two teenaged girls, one of whom has benefitted from a meaningful friendship formed through Best Buddies.

Joanne is an honours graduate of Queen’s University and continues to provide mentorship to young women transitioning from Business School to the workplace.

Jacqueline M. Harper obtained her law degree from the Université de Moncton and a Bachelor of Science from St. Francis Xavier University. She returned to Toronto and has practiced law for over 25 years, providing services in both official languages. She is currently in private practice, focused primarily on administrative law and civil litigation matters. In addition, Jacqueline is a Deputy Judge in Toronto and Certified Adjudicator. She is a past member of the Criminal Injuries Compensation Board and a current member of the Law Society Tribunal and Licence Appeal Tribunal. Her work has taken her across the Province, including attending to matters on the First Nations’ reserves of Moosonee and Attawapiskat. Jacqueline is an elected member of the Toronto Council of the Ontario Bar Association, as well as a member of the Society of Ontario Adjudicators and Regulators. She has been a frequent speaker on various legal issues. She is involved with a number of local charities and has been a life-long volunteer with various groups for people with intellectual disabilities.

Chris is the President of Blockchain Foundry Inc., a software development firm focused on the blockchain space. Prior to Blockchain Foundry, Chris worked for GMP Securities and Richardson GMP in corporate development and investment banking. He holds a Bachelor of Commerce degree from Queen’s University, a Masters in Finance from London Business School, and is a CFA charterholder.

Chris lives in Toronto with his wife and three daughters.

Mrs. Pantalone is Director of a number of family-owned real estate and development companies in Toronto, Canada, including National Homes, a major residential homebuilder, and Living Life Group, whose interests include developing and managing retirement residences as well as commercial development, infill housing neighborhoods and land development.
Mrs. Pantalone also sits on the board of The Institute for International Urban Development and is a current member of the Toronto Real Estate Board. As past Chair, and long-time Board Member of Montcrest School, an independent non-profit school in Toronto, Mrs. Pantalone directed overall growth, acquisition of land and campus development. Rene is a past Governor of the Canadian Olympic Trust, and a past member of the Canadian Olympic Association. Representing the Canadian Alumni, she was a board member of the Harvard University Graduate School of Design Alumni Council. Mrs. Pantalone has sat on the board of a number of charities in Toronto including The Sunnybrook Foundation, the Juvenile Diabetes Foundation, the Canadian Cancer Fundraising Committee and Rosalie Hall Home for Unwed Mothers. Rene was past chair of the TFSC for Ovarian Cancer which raised monies for both Toronto General Hospital and Princess Margaret Hospital Ovarian Cancer Research and clinics. Rene was instrumental in establishing the Ovarian Cancer Clinic at Princess Margaret Hospital as well as establishing The Heart of Fashion for North York General Hospital Breast Screening Clinic. Mrs. Pantalone's education includes both B.A. and B. Ed. degrees from York University in Toronto and she recently graduated from Harvard University Graduate School of Design, AMDP '05.

Deborah is the Founder and President of Bay Street HR, an outsourced human resource and board governance consultancy.

Deborah’s work is primarily within the financial services, media and technology sectors.

Deborah founded Bay Street HR in 2001 and since then has worked with many leading boutique firms and assisted in start-ups and mergers/acquisitions. She has leveraged her insights garnered through her consulting work to invest in several of her client companies. She recently ended her term on the board of VIA Rail, Canada’s national railway as Director, member of the HR Committee and Governance Risk and Strategy Committee. She is a Director of Best Buddies/ Vrais-Copains Canada, chairs the Human Resources Committee and co-chairs the Best Buddies Foundation. In addition, she is Director, Chair of the Governance and Compensation Committee for Park Lawn Corporation (PLC-TSX) and Canada Jetlines (JET-TSXV). Deborah was born and raised in the Boston area and moved to Toronto in 1995.

Back to Meet the Team

Start a Chapter! Become a Buddy!

Best Buddies provides all participants with a once-in-a-lifetime opportunity to make a new friend. We have chapters in every province of Canada.

There are several ways that you can help Best Buddies Canada enhance our communities through one-to-one friendships between people with intellectual disabilities and students. 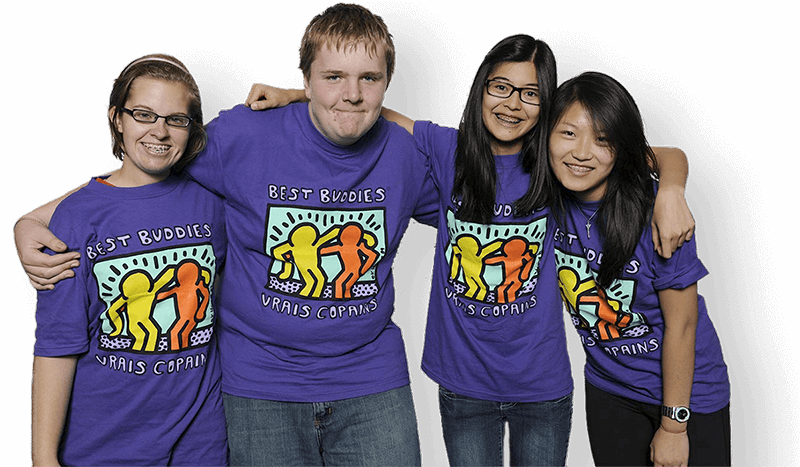 Type in the bar below to search...

We are sorry to say that this website does not support this Microsoft browser. Please update to Microsoft Edge that runs on Canary or use Chrome, Firefox or Safari to view this website.